Welcome to Apache Tomcat Tutorial. Learn to use Apache Tomcat as a JSP container, HTTP Web Server, etc., and understand configuration for security and scalability with examples.

Components and Features of Apache Tomcat

Jasper is the JSP Engine for Tomcat. Jasper is responsible for parsing JSP files and compilation of JSP’s Java code as servlets.

Jasper is capable of background compilation, which means if any changes are made to JSP files, then the older versions of those JSP files are still retained by the server, until the updated JSP files are recompiled.

Coyote is the component that makes Tomcat capable as a HTTP Web Server. Coyote makes Catalina also act as a server that serves static content.

To install Tomcat on Ubuntu, you could use command line interface and run the following command :

If you would like to install tomcat7 for some project related reasons, use tomcat7 instead of tomcat8 in the command.

Following are the useful locations that we may need in furthur steps :

You could check if the Tomcat server is running, by opening a browser and hitting the url http://localhost:8080/.. Something similar to the following would be responded back with. 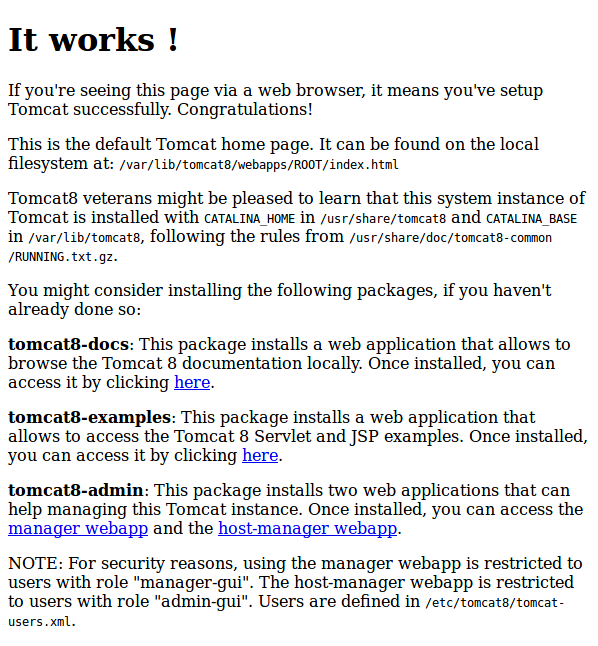 Once you install Tomcat, it is started automatically.

In case if you have stopped it manually, and would like to start Apache Tomcat again, open a terminal and run the following command :

There could be scenarios, like you have updated your web-application, where you may need to restart Apache Tomcat for the server to pickup the changes.

To restart Apache Tomcat, Open a Terminal and run the following command :

If you have installed tomat7, use tomcat7 instead of tomcat8 in the above command.

In the following sections, we shall learn to deploy static and web applications in tomcat.

To deploy static web application with Tomcat, all you need to do is copy your project folder to tomcat web-apps directory.

Now restart Tomcat for the changes to take effect.

Open a broswer, and hit the url, http://localhost:8080/StaticWebProject.

With these series of tutorials, we have learnt how to configure and work with Apache Tomcat.