Kafka is a distributed streaming platform. Kafka can be used for building realtime streaming application that can transform the data streams or deduce some intelligence out of them.

This Apache Kafka Tutorial provides details about the design goals and capabilities of Kafka. By the end of this series of Kafka Tutorials, you shall learn Kafka Architecture, building blocks of Kafka : Topics, Producers, Consumers, Connectors, etc., and examples for all of them, and complete step by step process to build a Kafka Cluster.

Apache Kafka officially provides APIs to Java. It also provides Command Line Interface. So, having a knowledge of Java programming and using command line tools would help to follow this course easily.

Kafka has been originally developed at LinkedIn and has become a top level Apache project during 2011. The main goal of Apache Kafka is to be a unified platform that is scalable for handling real-time data streams.

Following are some of the design goals for its framework : 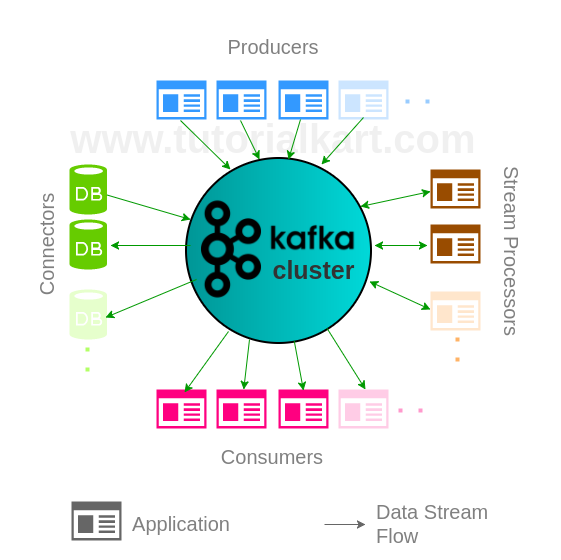 Topic is a category in which streams of events/records are stored in Kafka cluster. A Kafka cluster can have multiple topics.

A Kafka Topic could be divided into multiple partitions. Partitions are the ones that realize parallelism and redundancy in Kafka.

Kafka Cluster consists of multiple brokers and a Zookeeper.

Broker is an instance of Kafka that communicate with ZooKeeper. Each broker holds partition(s) of topic(s). Some of those partitions are leaders and others are replicas of leader partitions from other brokers.

Role of ZooKeeper in Kafka

ZooKeeper is used to automatically select a leader for a partition. In case of any broker shutdown, an election is held, by ZooKeeper, for leader position of partitions (that went down with the broker). Also metadata like, in which broker a leader partition is living, etc., are held by ZooKeeper. Producers that stream data to topics, or Consumers that read stream data from topics, contact ZooKeeper for the nearest or less occupied broker. 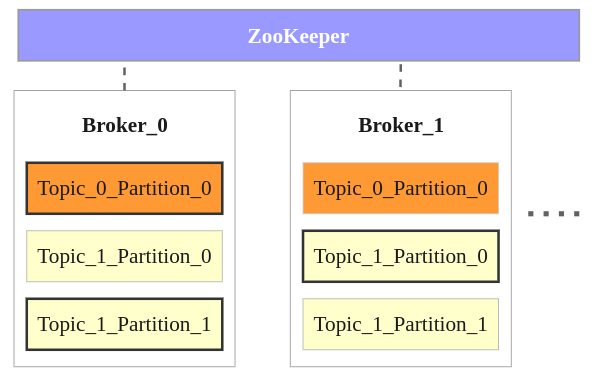 Following points could be made from the above image :

Producers are applications that send data streams to topics in Kafka Cluster. A producer can send the stream of records to multiple topics. Apache Kafka Producer API enables an application to become a producer.

Consumers are applications that feed on data streams from topics in Kafka Cluster. A consumer can receive stream of records from multiple topics through subscription. Apache Kafka Consumer API enables an application to become a consumer.

Kafka Tutorial for demonstrating to start a Producer and Consumer through console.

Now, Monitoring your Kafka Cluster has become easy. Kafka Monitor is relatively new package released by LinkedIn that can be used to do long running tests and regression tests. No changes are required to existing Kafka Cluster to use Kafka Monitor.

The biggest advantage Kafka Monitor brings in is that, with the help of long running tests, you may detect the problems that develop over time. With Kafka Monitor you can have tests which talk to Kafka Cluster and bring in reports about the impact of your change in the Kafka Cluster during continuous development and regression.

Confluent is a company founded by the developers of Kafka. They provide additional connectors to Kafka through Open and Commercial versions of Confluent Kafka. They also support you through any Kafka Cluster or application setup in case if you need it in your organization. In this tutorial, we shall give an introduction to Open Source variant of Confluent Kafka and some of the connectors it provides.

Following are some of the example Kafka applications :

In this Kafka Tutorial, we understood what a distributed streaming is, the building components of Kafka framework, the core APIs of Kafka, scalability dimensions, the use cases Kafka can address.