Welcome to Cypress Tutorial by TutorialKart.com.

Cypress is an end to end testing framework. It helps to perform front end testing on web applications with ease.

In this Cypress Tutorial, we will get a hands on experience with using Cypress framework to perform an end to end testing on a web application.

You should have node.js installed prior to using Cypress. Node.js is a prerequisite. To install node.js on your computer, refer Node.js Tutorial.

We shall try using Cypress framework to perform end to end testing on this application.

Create a HTML file with the following content in a directory.

Open this directory in a Visual Studio Code IDE and run the following command in a Terminal.

Run the following command to make the HTML page available at a URL. 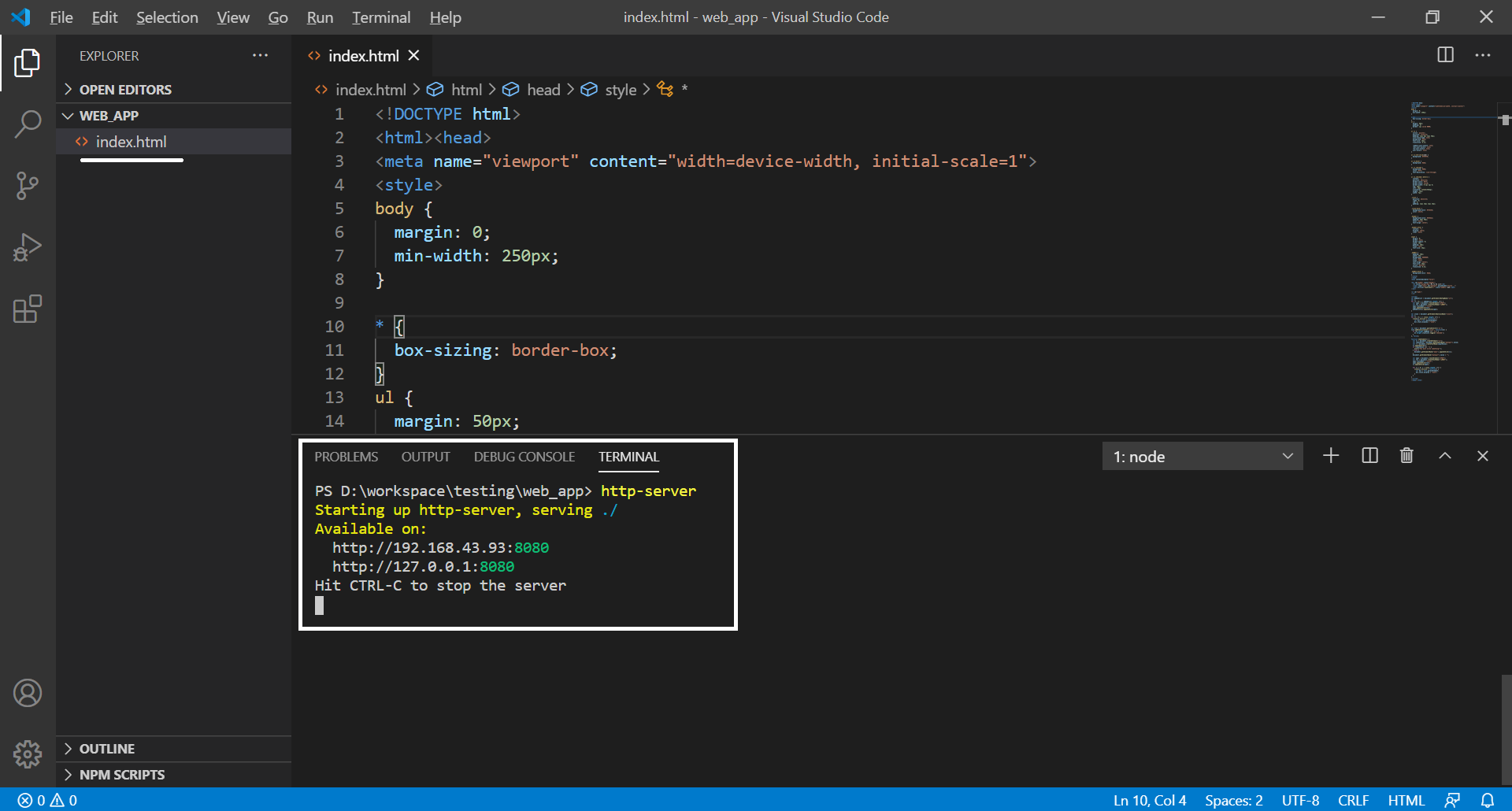 Create a directory for placing your project. We shall use this directory as project folder in Visual Studio Code. 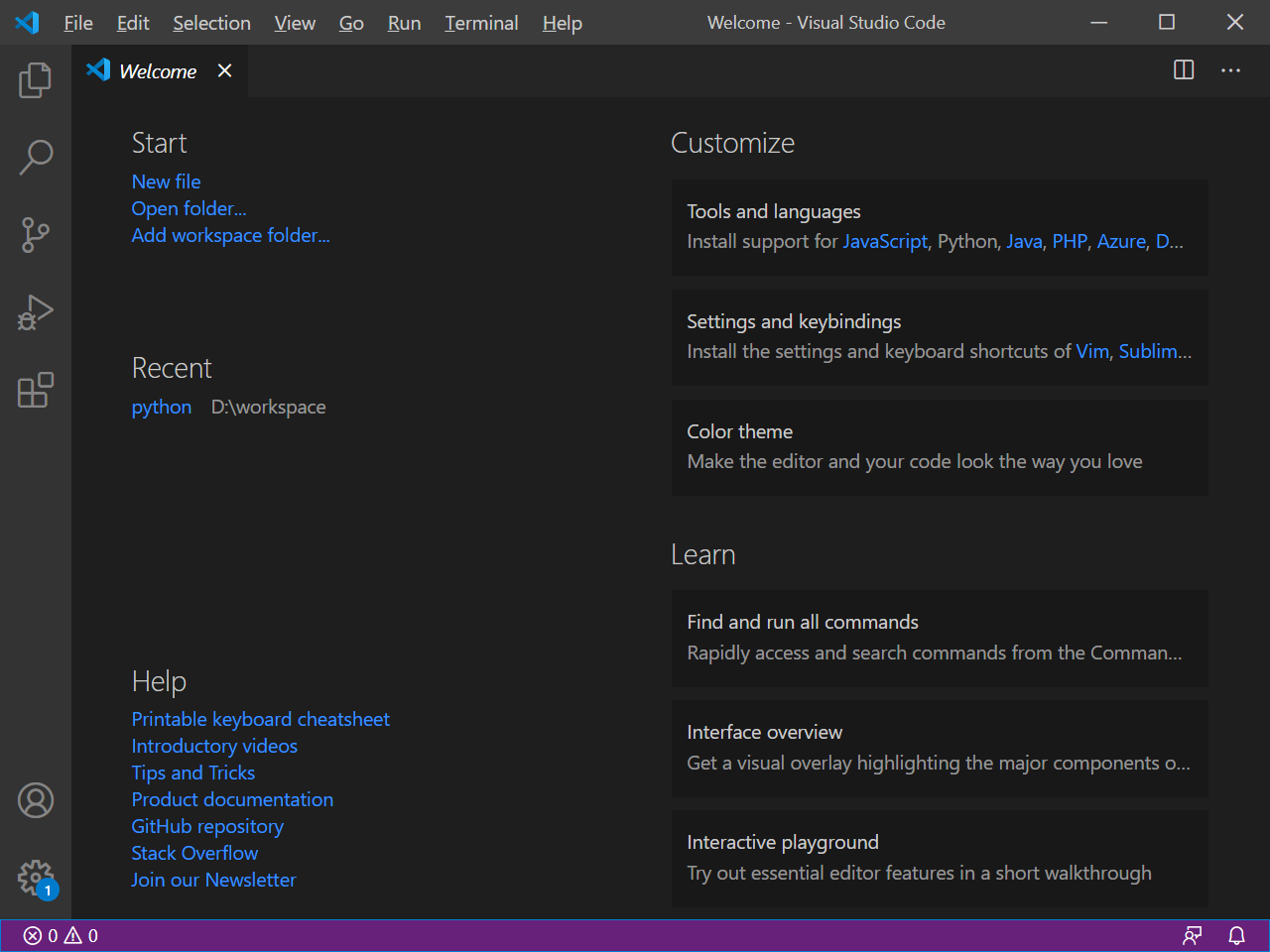 Click on Open folder… and navigate to the directory we created for keeping project files. 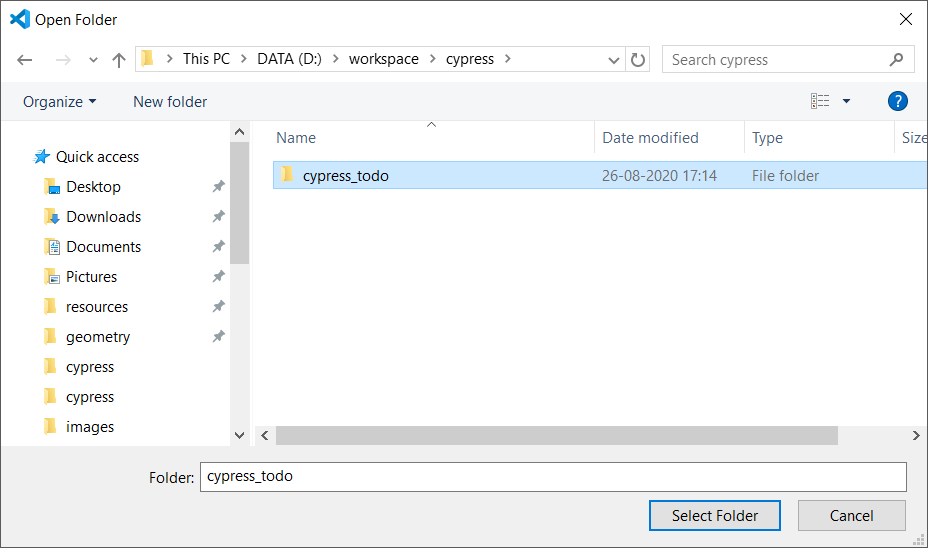 The project folder would be empty, as we have not created any files in it. 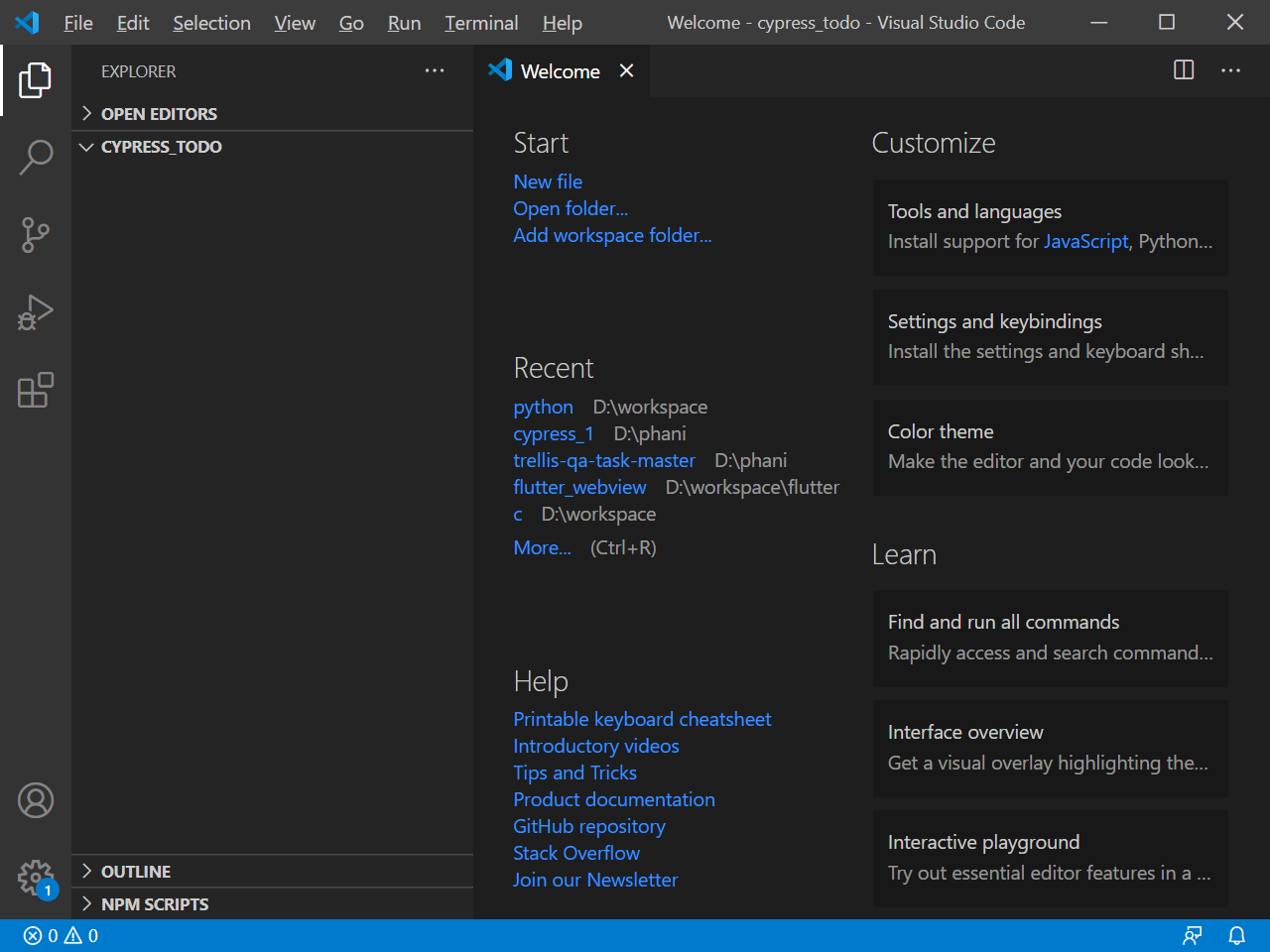 You can install Cypress using npm. Run the following command in the Terminal Window, that we just opened in Visual Studio Code. 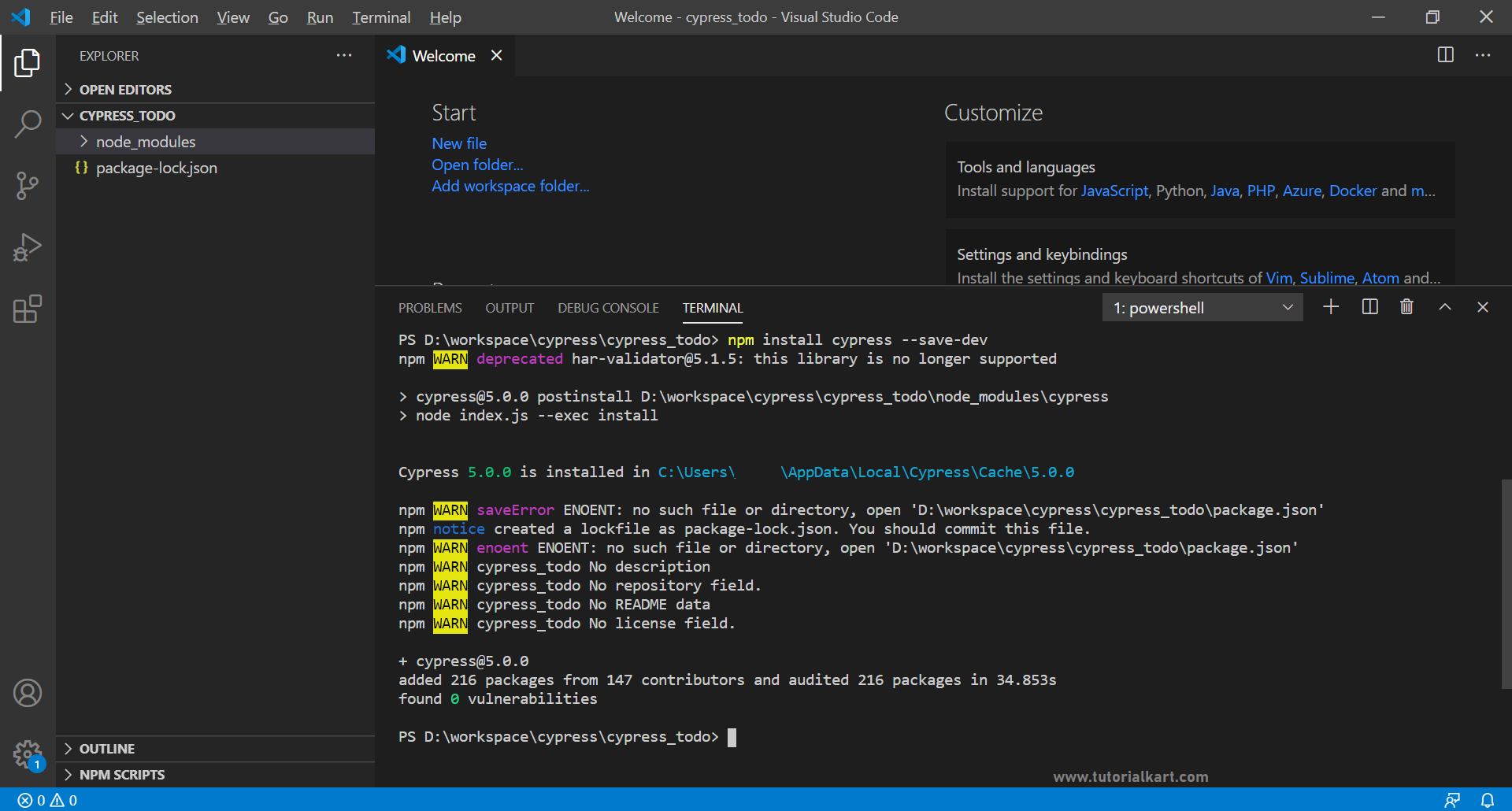 During Cypress installation, package.json file and node_modules directory are created in our project.

Run the following command, to create Cypress related file structure in the project.

Cypress project files would be created and a Cypress window would open as shown below. 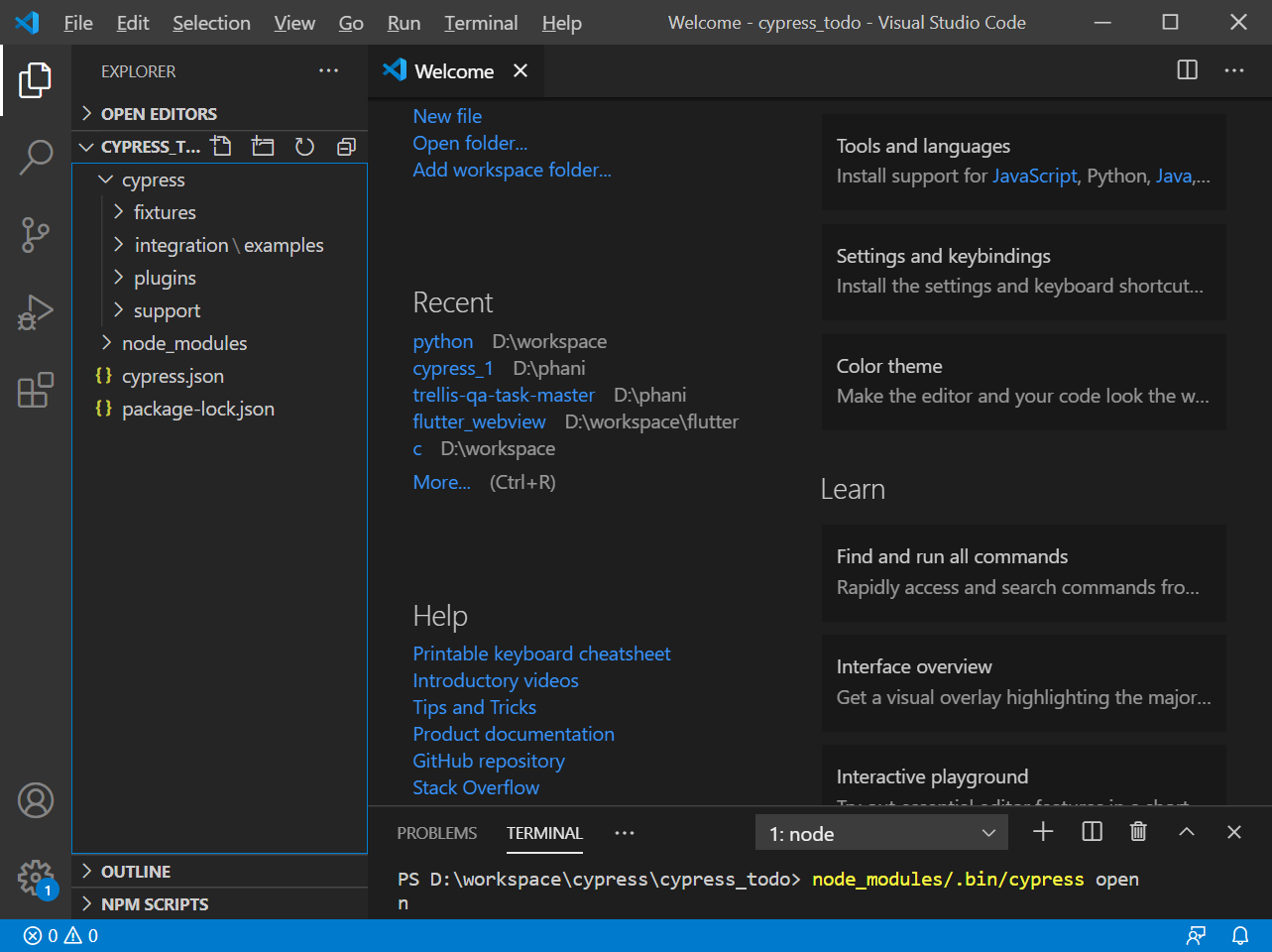 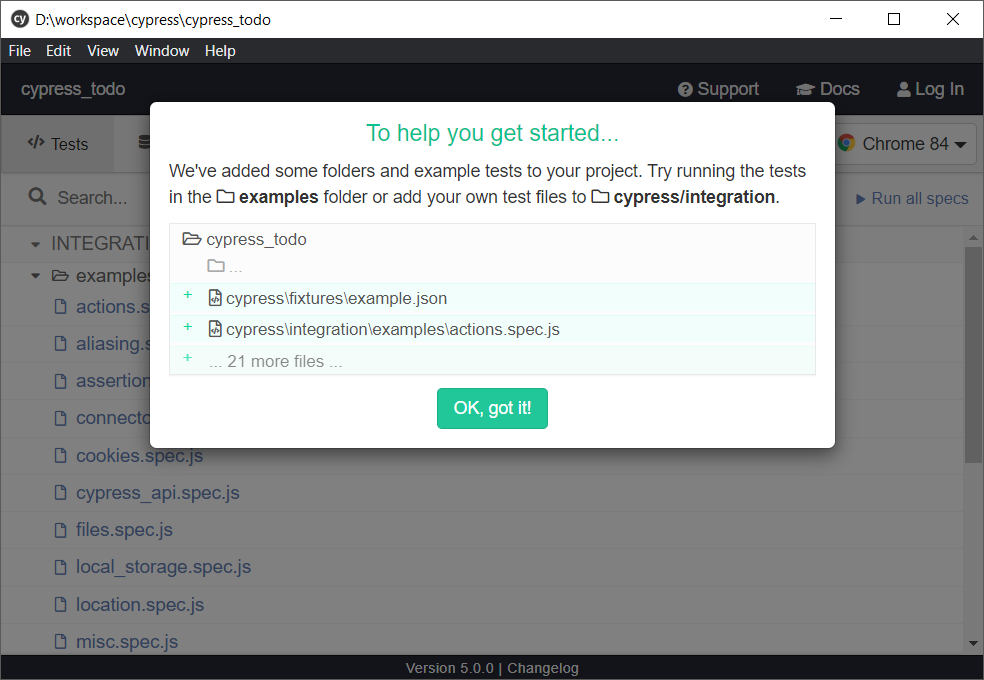 Now we are ready to start writing our first test file in Cypress.

Create a file named app.spec.ts in cypress/integration directory. Now, we shall write a simple test case in this file as shown below. 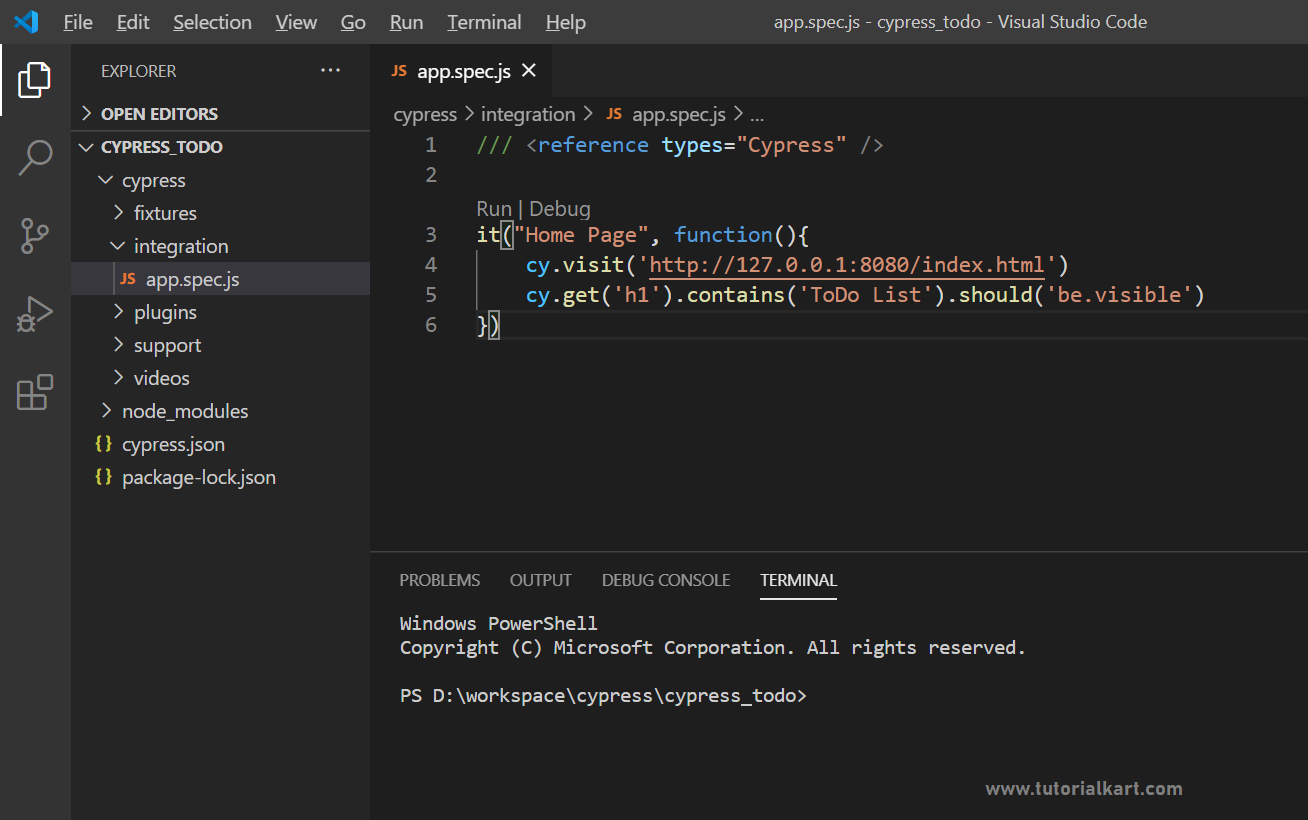 it() is used to define a test case. The first argument to is title for the test case, and the second argument is a function, that contains the logic to validate this test case.

cy.get(selector) traverses the html document loaded by the url and returns the nodes based on the argument to it. In this example, we have given the selector as “h1”, which means cy.get() gets all the h1 headings in the html document.

cy.contain(text) method gets the elements containing the text. The text is given as argument to it. Here, cy.get(‘h1’).contains(‘ToDo List’) filters all the elements returned by cy.get(‘h1’) based on the condition that the element should contain the text “ToDo List”.

should(‘be.visible’) asserts that atleast one of the elements should be visible.

All the cy methods we used in this example are chainable. Hence, we have written them as a single statement.

To run Cypress tests, run the following command in terminal, from the root of your project folder.

We have already used this command to create the default folder structure and files for Cypress project.

After you run this command, Cypress window appears as shown below. 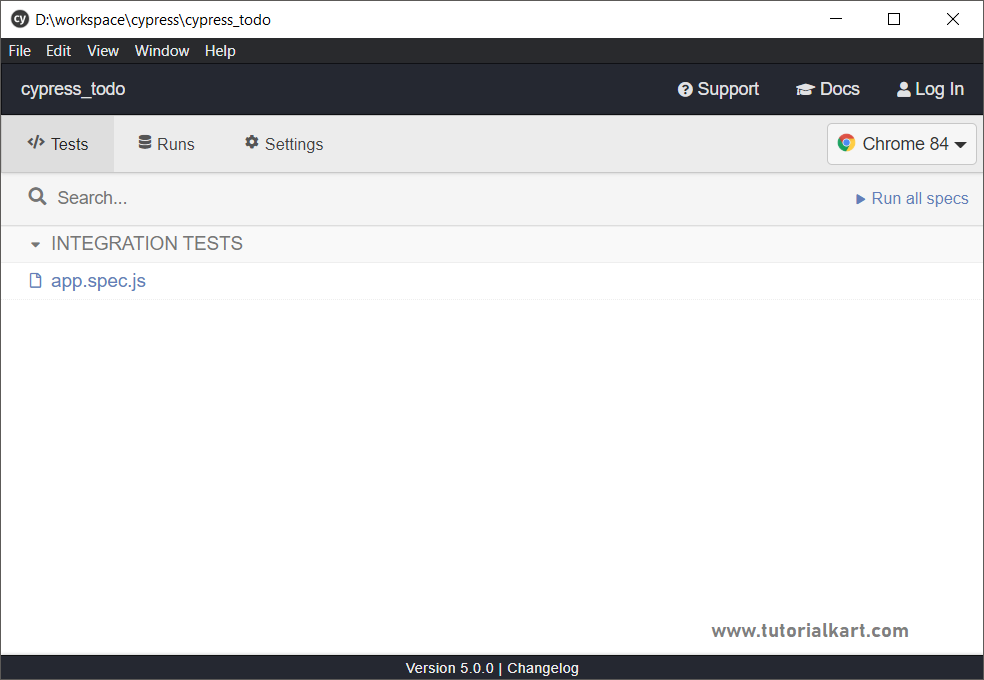 Now, you may click on Run all specs (present on the top right corner) to run all the test files or click on an entry to run that specific test file.

A new browser window appears and runs the specs with the default browser. 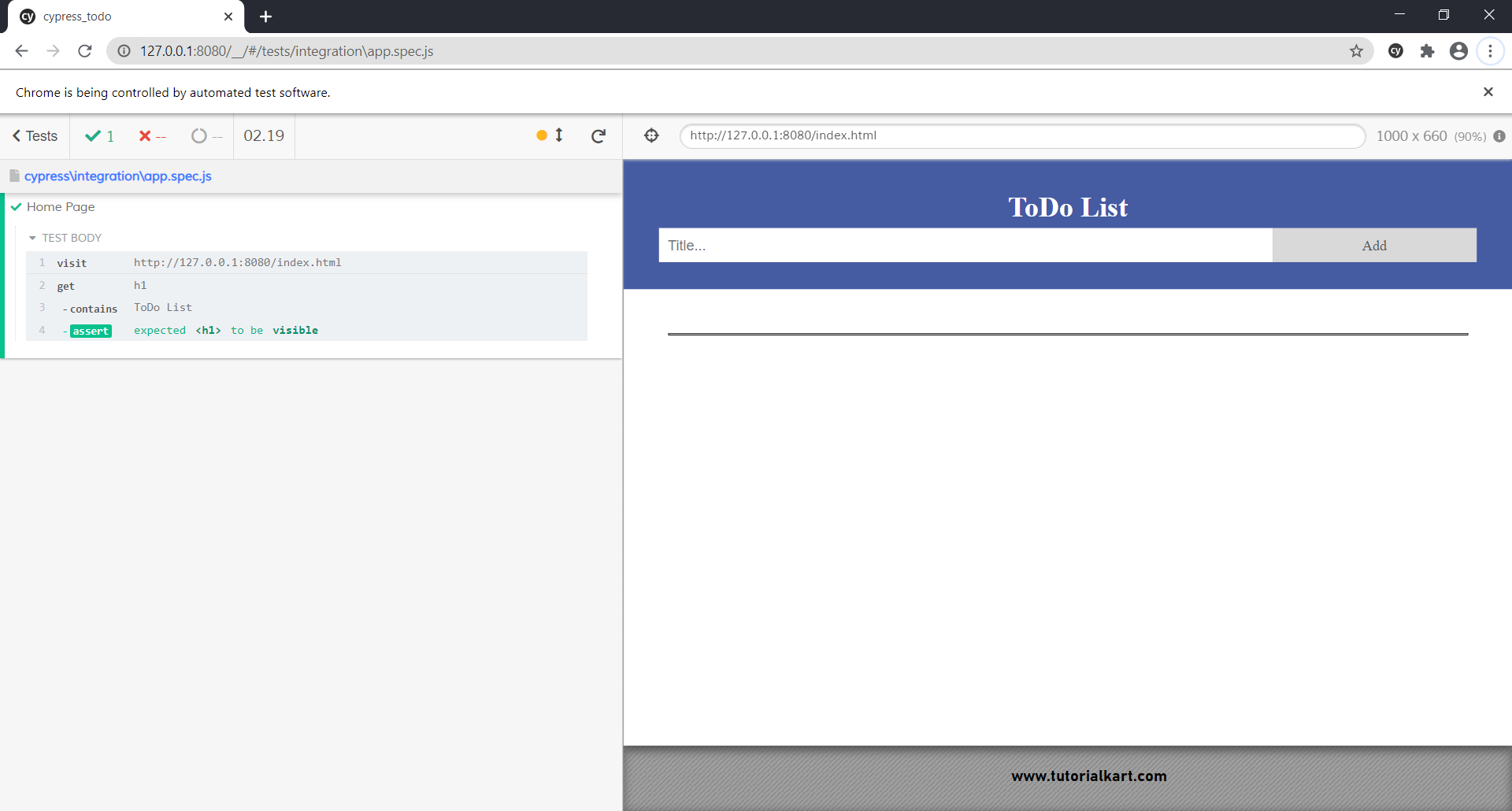 You can write a test suite (multiple tests), using describe().

In the following app.spec.js, we have written following testcases.

Run the app.spec.js file by clicking on it. The output would be as shown in the following screenshot.

In this Cypress Tutorial, we learned how to use Cypress to perform end to end testing on your web application.