What is a DAG according to Graph Theory ?

From Graph Theory, a Graph is a collection of nodes connected by branches. A Directed Graph is a graph in which branches are directed from one node to other. A DAG is a directed graph in which there are no cycles or loops, i.e., if you start from a node along the directed branches, you would never visit the already visited node by any chance.

What does a DAG mean to Apache Spark ?

Unlike Hadoop where user has to break down whole job into smaller jobs and chain them together to go along with MapReduce, Spark Driver identifies the tasks implicitly that can be computed in parallel with partitioned data in the cluster. With these identified tasks, Spark Driver builds a logical flow of operations that can be represented in a graph which is directed and acyclic, also known as DAG (Directed Acyclic Graph). Thus Spark builds its own plan of executions implicitly from the spark application provided.

Execution Plan tells how Spark executes a Spark Program or Application. We shall understand the execution plan from the point of performance, and with the help of an example.

Consider the following word count example, where we shall count the number of occurrences of unique words

Following are the operations that we are doing in the above program :

It has to noted that for better performance, we have to keep the data in a pipeline and reduce the number of shuffles (between nodes). The data can be in a pipeline and not shuffled until an element in RDD is independent of other elements.

In our word count example, an element is a word. And from the tasks we listed above, until Task 3, i.e., Map, each word does not have any dependency on the other words. But in Task 4, Reduce, where all the words have to be reduced based on a function (aggregating word occurrences for unique words), shuffling of data is required between the nodes. When there is a need for shuffling, Spark sets that as a boundary between stages.

In the example, stage boundary is set between Task 3 and Task 4.

This could be visualized in Spark Web UI, once you run the WordCount example. 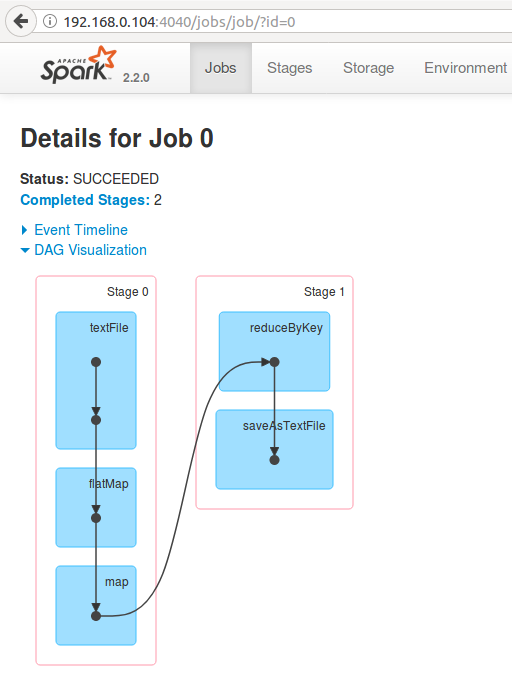 Tasks in each stage are bundled together and are sent to the executors (worker nodes).

How Apache Spark builds a DAG and Physical Execution Plan ?

Following is a step-by-step process explaining how Apache Spark builds a DAG and Physical Execution Plan :