Similar to Java, Kotlin also provides the concepts of Classes and Constructors. In addition to that Kotlin has two kinds of constructors: Primary and Secondary; and initialization blocks.

A class is the base of object oriented programming.. A class is kind of a blue print for type of objects that belong to the class type.

Let us have a quick look into an example of a Kotlin Class to know the placement of Kotlin Constructors : 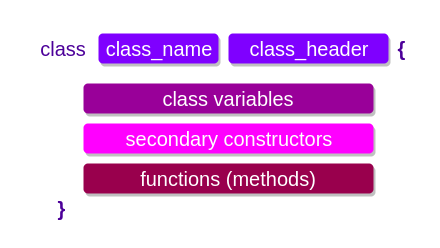 Structure of a class in kotlin

As mentioned in the picture above, a class has following three parts :

A Kotlin Primary Constructor is highlighted in the following Example :

The default visibility on the primary constructor is public. However, the visibility can be changed to private, protected or internal. The syntax is given below :

Constructors that are written inside the Body of Class are called Secondary constructors.

The following example demonstrates the usage of secondary constructor :

The default visibility of secondary constructor is public. However, the visibility can be changed to private, protected or internal. The syntax is given below :

An example Kotlin program to demonstrate the working of Kotlin init block is given below :